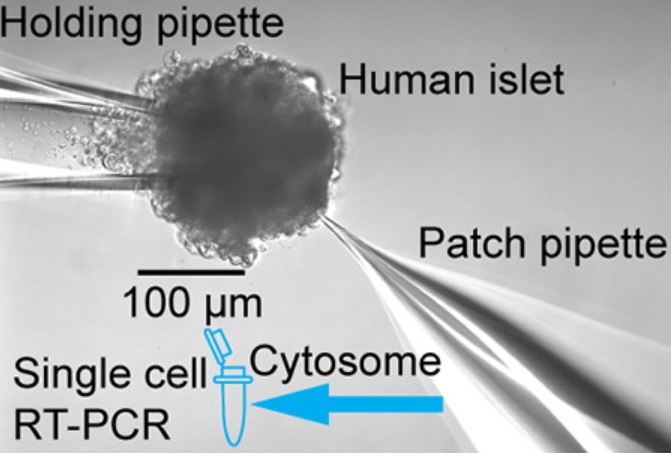 
Autoimmune diabetes is a disease where the immune system attacks and destroy healthy tissue, in this case the beta cells in the islet of Langerhans in the pancreas (1). It leads to absolute insulin deficiency and a lifelong treatment with insulin through injections or an insulin pump. There is no way to prevent the disease in humans, even though we since long time can detect biomarkers that the disease is developing (perhaps most exciting so far 2). There is no viable cure, but many promising trials is ongoing at different places around the world.

CHALLENGES WITH A CURE

A lot of experiments try to replace the destroyed beta cells with primarily stem cells, which is the most interesting area of research. There are many challenges to overcome, the most important are:

OTHER WAYS TO RESOLVE INSULIN SECRETION?

One interesting research area has for years been to look in to the remaining beta cells we all have. Since many years’ it´s well established that all people with autoimmune diabetes have absolute insulin deficiency sooner and with LADA later, but all still have minor amount of beta cells left. Not contradictory. At diagnose in general 80-90% of the beta cells are lost, this is generally accepted (9). The destruction continues over time, different in different people. Please note that the remaining amount is so small nobody with absolute insulin deficiency can live without exogenous insulin, even if only drinking water and eating lettuce every day.

Unfortunately we have no method to analyse beta cells death, we can only measure C-peptide (10). This is done in several well controlled studies (11, 12, 13) and has led to the questions;

Why a few cells are not attacked we don´t know. Kevan Herold with colleagues showed last year that “During the development of diabetes, there are changes in beta cells so you end up with two populations of beta cells. One population is killed by the immune response. The other population seems to acquire features that render it less susceptible to killing.” (Yale press release 14, the study 15). The new subpopulation of beta cells becomes Btm cells, a stem cells like condition. The Btm cells express molecules that inhibit the immune response. This is one theory, among others. Very visual picture from the paper: 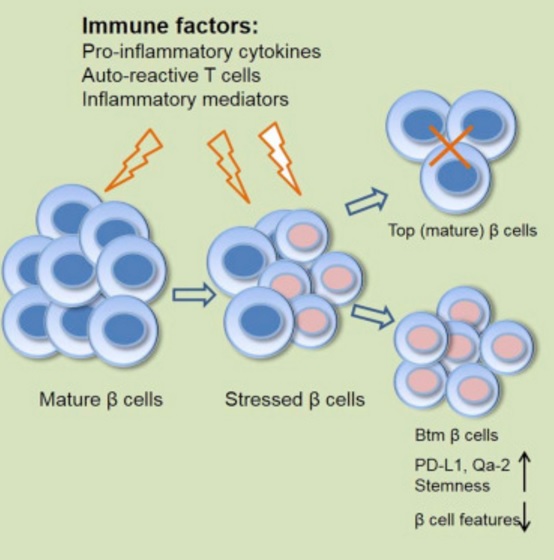 For decades there have been a theory that progenitor cells do exist in the pancreas. Progenitors are kind of descendants of adult stem cells that can be self-renewed and differentiated into mature cell types, DRI write in the paper below; “cells that exhibit a variable degree of potency and proliferation potential. The potency and role of adult progenitor cells is organ and context-specific”. Some years ago this hypothesis was challenged and researchers meant what we do see is basically self-replication, the differences are several but particular if self-replication is what we see, the capacity is limited due to the small fraction of the beta cells surviving years after onset. In any case the studies above shows declining insulin production (C-peptide) from an already low level, so the regeneration of cells that eventually do occur is not clinical relevant. What is very interesting, if we are able to solve the autoimmunity, can we affect regeneration?

HOW TO TAKE IT FROM THERE?

In animals, beta cell proliferation occur quite often. Proliferation means events that leads to increasing amount of cells, particular cell division bot not exclusively. Clinical relevant beta cell proliferation doesn´t happen in humans. If it would be possible to regenerate beta cells in people with absolute insulin deficiency, all improvement would though have impact on glucose control. Most probably not to the extent as a cure. One study about beta cell proliferation was published last week, the week before another about what decides the fate of a progenitor cell (read more below) to be an insulin producing beta cell and the third news is a very exciting human trial just started in Sweden. Different research but the idea is similar: to restore insulin production, partly or totally.

DRI at the University of Miami published a paper in “Trends in Endocrinology and Metabolism” 4th of December, where the researchers demonstrate that yes – there are progenitors in human adult pancreas (full paper 16, article from DRI 17). The major difference between progenitors and stem cells in the case of resolving insulin production is that stem cells as of today either needs immunosuppressant’s if we use human embryonic stem cells, or we need a method for encapsulation, which still might need immunosuppressant’s. If we are able to use iPSC (induced pluripotent stem cells) one day, we might avoid immunosuppressant’s. This is the most exciting area of research as a potential cure for insulin-treated diabetes but not close to reality, it will take years and we don´t see human trials yet, except from approaching other diseases, in Japan (18). The progenitor cells are our own cells meaning no immunosuppressant’s needed, but can they be stimulated and turned into insulin producing beta cells, cause neogenesis (“de novo formation, e. g., of b-cells from non-b-cells. When applied to the generation of a new differentiated cell, this concept is usually presented as an alternative to self-replication e.g., a b-cell giving rise to two b-cells by proliferation”. Dictionary from DRI above)? We will see.

Researchers from University of Copenhagen in Denmark and the Helmholtz Zentrum München German research center for environmental research, lead by Professor Henrik Semb, showed in Nature two weeks ago mapping of the signals that determine the fate of the progenitor cells in a lab. Semb describes their finding here in a short clip from the university 19. When the cells are expressed for a certain protein they become endocrine cells, and another protein they become duct cells (see DRI´s paper above with a small dictionary). This is regulated by a signalling system called Notch, known since decades but unknown how Notch is turned on/off. Semb describes the process as a pinball game in the clip above, depending on which pin they hits decide the fate. The knowledge can be used how to produce more efficient insulin producing beta cells from human stem cells in lab. At the same time stem cells research are making progresses and it´s a very exciting area with huge potential for many diseases, it´s still challenging in many ways and particular the tumorigenic risk is not fully understood. Semb´s team said last year; “Although significant progress has been made towards making insulin producing beta cells in vitro (in the lab), we are still exploring how to mass-produce mature beta cells to meet the future clinical needs. Our current study contributes with valuable knowledge on how to address key technical challenges such as safety, purity and cost-effective manufacturing, aspects that if not confronted early on, could hinder stem cell therapy from becoming a clinically and commercially viable treatment in diabetes.” (20).

My question was, can Sembs team’s protocol be used at the progenitor cells in a human pancreas as well, for self-replication and as the procedure DRI describes above? Not as a cure but until we knows more about risks with stem cells, to improve glucose management and control? I asked Professor Semb; “Probably not, our finding is not related to how progenitors divide, neither in organ development nor in a human adult. Our finding is rather how progenitors are instructed to develop to certain cell types, i.e. beta cells. This is useful to more efficient control that progenitors from stem cells becomes beta cells and nothing else”.

It´s known that the neurotransmitter gamma aminobutyric acid, GABA, is important in both type 1 and 2 diabetes. Research have showed different levels of GABA in people with diabetes compared with healthy individuals. GABA is synthesized by an enzyme called GAD from the amino acid glutamate in nerve cells but also, importantly, in the insulin-producing beta cells in pancreatic islets (22). GAD has two forms, GAD65 and GAD67, and in type 1 diabetes the most common form of autoantibody is to GAD65, often referred to as GADA.

The roles of GABA in islets are many and one is to inhibit toxic white blood cells. An international research group led by Professor Per-Ola Carlsson at Uppsala University in Sweden, spring 2018 published two papers where they had isolated immune cells from human blood and studied the effects GABA had on these cells. First, they were able to determine GABA concentration in human islets, and showed that ion channels that GABA opens became more sensitive to GABA in type 2 diabetes and that GABA helps regulate insulin secretion (23). In the other paper they show that GABA inhibited the immune cells and reduced the secretion of a large number of inflammatory molecules (24.

Diamyd Medical is a Swedish company with several human trials ongoing, with different approach (the company 25, trials 26). Diamyd has developed a tablet, Remygen, based on GABA that in an experimental trial will be tested in humans at two different places (27). GABA together with Diamyd (antigen-specific immunotherapy, a vaccine) at University of Alabama (see more information in the link about trials above) and only GABA in 30 adult patients that have had type 1 diabetes for more than five years (study name ReGenerate-1). I asked Professor Carlsson, leader of ReGenerate-1 about status, and first patient started last Monday. Still looking for participants. First phase of ReGenerate-1 is an initial safety and dose escalation part comprising six patients, and the main trial comprising 24 patients that will be followed for up to nine months depending on the dosage group they belong to. After safety evaluation, the plan is to see if Remygen can regenerate insulin producing cells, meaning increased own production of insulin. Final results planned in 2020, according to Carlsson. Personally I´m sceptic by nature, so I doubt this might be a cure. But again, all improvement in management of the disease that is possible is helpful for millions of people with insulin dependent diabetes, so I will follow up this for sure.

There is obviously beta cells left in all with autoimmune diabetes, clinical irrelevant and still the disease means absolute deficiency. If and how those cells can be saved, increased or if they provide useful information how to resolve insulin production, is unknown today. There is a number of projects that try to convert alpha cells in the islet of Langerhans to beta cells, alpha cells are not attacked and destroyed in people with autoimmune diabetes. More about that in another article since I´m waiting for some results.

Research learns us more continuously, the human body is indeed complex. There won´t be a viable cure or a possible solution for increased insulin production until autoimmunity is solved, but if the researchers one day might be able to do that we rely on a method that doesn´t involve immunosuppressant’s. Otherwise it won´t be a solution for the majority.

Even though diabetes research suffer due to lack of donations there are exciting projects ongoing, in humans as well. Human trials are beyond important, even if experimental as with GABA we must move to humans to proceed. For this, diabetes research need funding since these trials are expensive.

As I wrote in the beginning, everything that might improve the management are beyond important. For a functional cure there are many challenges to tackle and a long way to go, but we will definitely continue to see small steps in a positive direction. Personally, I´m totally convinced we will see a cure, not in the near future and not if organisations get more funding.