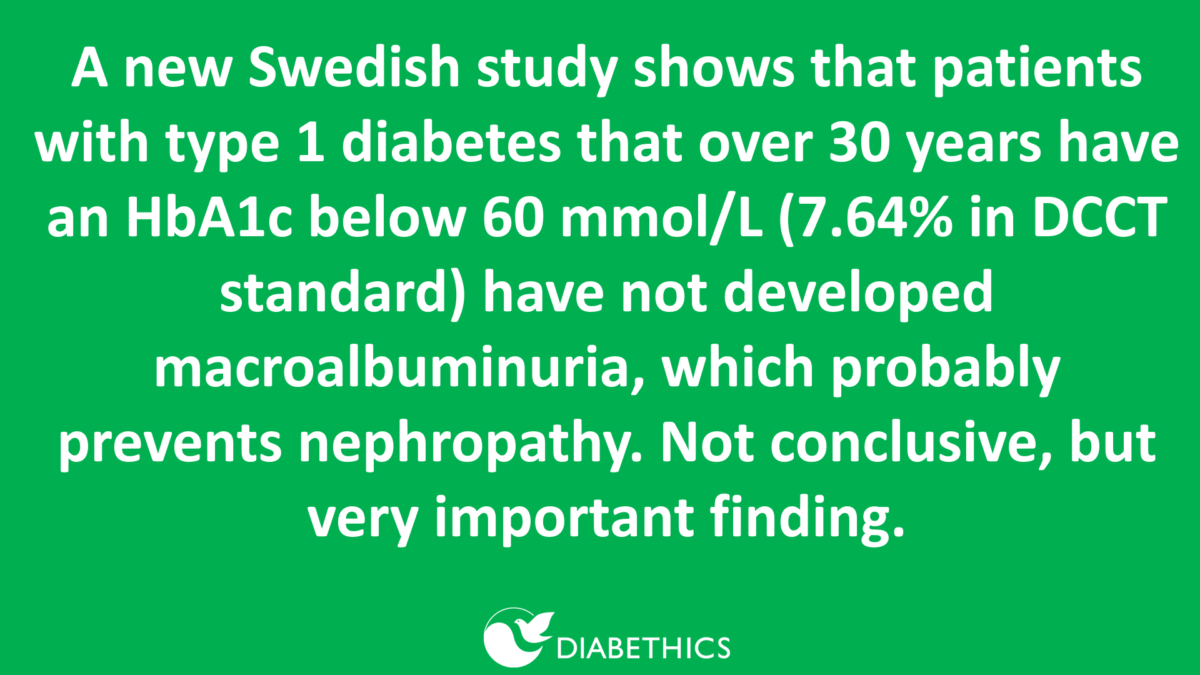 Does A1c below 60 mmol/mol prevent complications?


Amazing result was published the 22nd of September at EASD, from one of few longitudinal studies there is in type 1 diabetes – the VISS study. The study shows that patients that over time have an HbA1c below 60 mmol/L (7.64% in DCCT standard, see my converter 1) have not developed macroalbuminuria, which probably prevents nephropathy.

There are very few longitudinal studies that have followed patients with type 1 diabetes, hereinafter called autoimmune diabetes, for many years. Most well-known is of course the amazing DCCT/EDIC papers that are still very actual 30 years and counting. More or less all diabetes guidelines around the world are based on findings from the DCCT/EDIC. There are as of today 232 papers published from the DCCT/EDIC cohort. I am in close contact with the DCCT/EDIC team and will of course write more about this in the future. Here is one of the papers from 2016, 2. Some findings in short:

This graph from the DCCT/EDIC is one of the most frequently shown the last 25 years. I asked the DCCT/EDIC team about the origin, the data are there but this graph may be generated by someone else. They don’t know actually, but a similar graph is presented in a paper by Professor Jay Skyler around 1995. As well as it gives a hint based on some of the most important studies ever, I find it simplified today, considering we know HbA1c is not all (more below) and some interpret this as very precise boundaries. For example, that an A1c of 8% in DCCT, equivalent to 64 mmol/mol, automatically increase the risk with X% for person Y. We can’t judge for an individual. 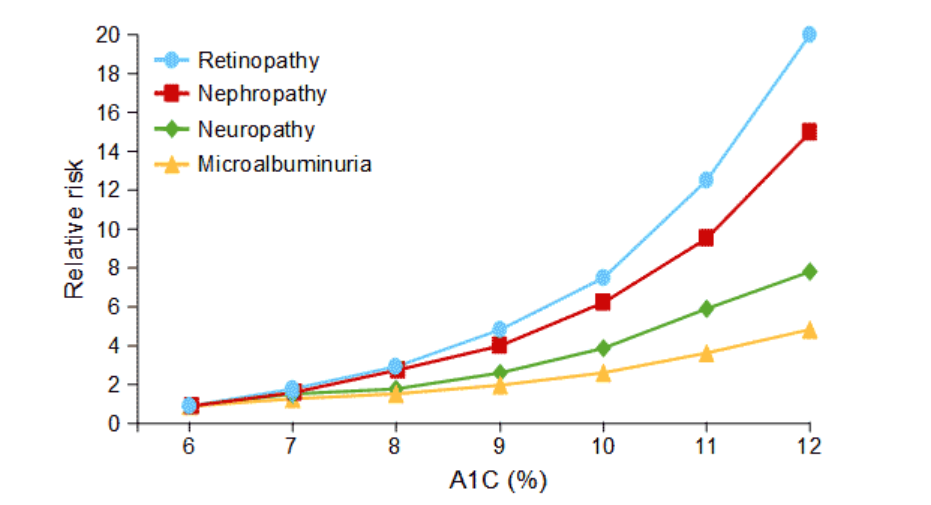 Another paper from Sweden followed a small group (14 people) for 29 years, more or less in line with DCCT/EDIC. One of the authors is a good friend of mine, Professor Emeritus Ulf Adamson. The paper (5) found that:

The VISS study have published results after 10 years (6), 20 years (7) and soon to be published 30 years. What is interesting with the VISS study as well as a difference to DCCT/EDIC is that patients are followed from diagnosis in 1983-1987 and they included all people diagnosed with autoimmune diabetes in a certain region. Patients were 0 to 35 years old. In Sweden the HbA1c had just been established clinical and the patients HbA1c are followed up 2-4 times a year. They have focused at retinopathy and nephropathy, and the 20 year follow up showed that patients with a consistent HbA1c below 60 mmol/mol (7.64% DCCT) did not have any of those complications.

The poster presented at EASD three days ago shows a mean follow up of 32 years and of the original 448 patients they had information about nephropathy for 438 of them. 33 of the patients (7.5%) had persistent macroalbuminuria. We already know there is a strong correlation between HbA1c over time and risk for nephropathy, the authors wrote that it still seems (referring to their previous papers) that a HbA1c below 60 mmol/mol probably prevents nephropathy. I asked head author Professor Emeritus Hans Arnqvist about data for retinopathy, he replied that is currently finalized and everything will be published in a scientific journal later. I will naturally come back to this, but I find this too important to not immediately publish an article about. I will update this article when I get data for retinopathy. The abstract online 8, see picture below. 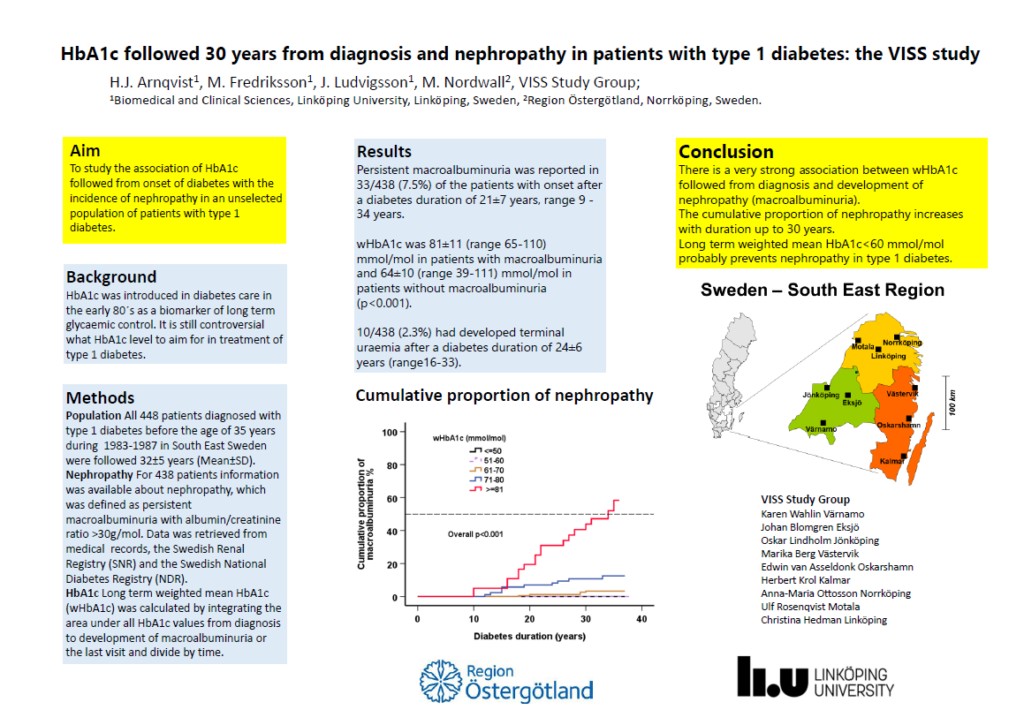 The result is amazing of course but it’s also important to remember a few things. 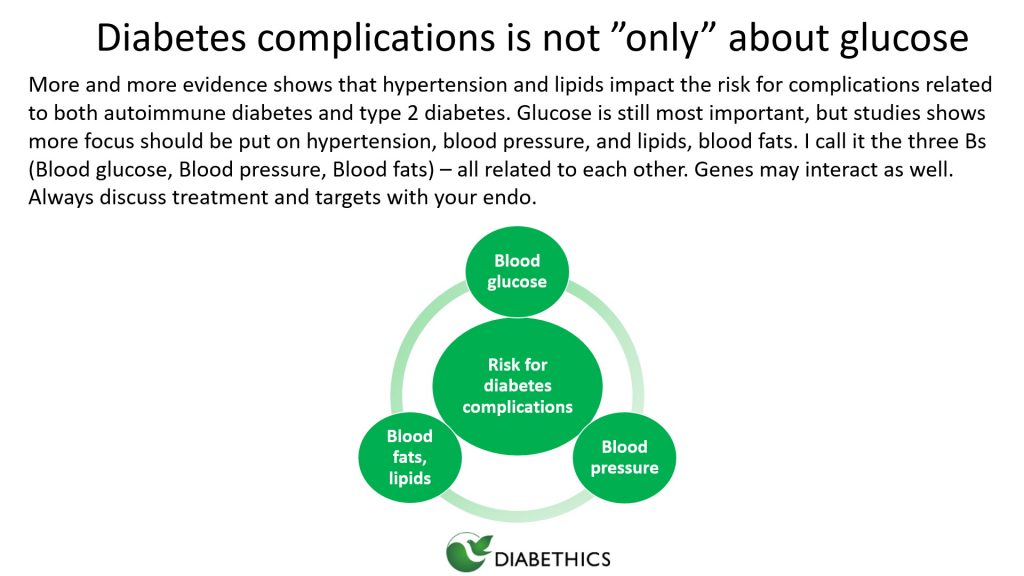