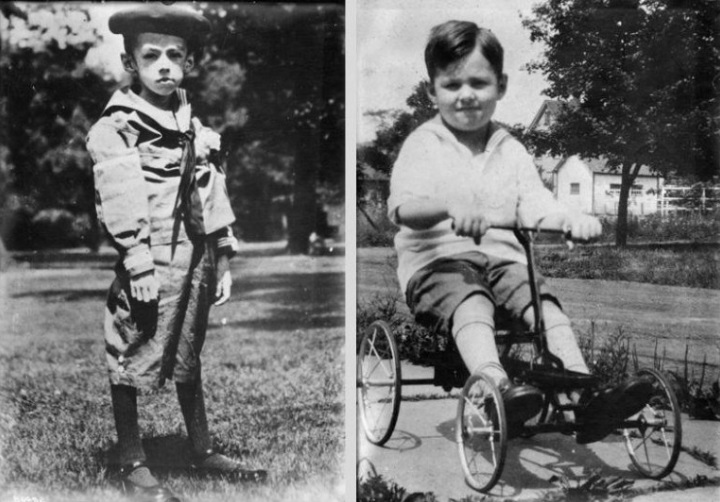 
Diabetes is one of the oldest diseases we know that still exists (1). Before the discovery of insulin, autoimmune diabetes was an absolute death sentence. Without any chance to treat people, desperate ideas was tested.

Seen as a pioneers the years before 1921 was Frederick Allen and Elliot Joslin, who promoted the “starvation diet” particularly from 1915 to 1922. There was no doubt fasting could reduce glucose levels but calorie restriction caused other hazards, mostly death by starvation. Allen developed his therapeutic ideas in 1913 at the Hospital of the Rockefeller Institute in New York, after experiments in dogs. The starvation diet was about 700 calories a day with one fasting day a week. Between 1914 and 1917, Allen with colleagues treated 100 patients at the Rockefeller Hospital, 76 of these are described in detail in a paper as “the Rockefeller series”. This is the most comprehensive data we have from this period. There was no control group, we don´t know how many of the patients that in fact had type 2 diabetes (at the time people were not aware of differences, most probably the older patients had type 2 diabetes), and we know today that some adults with autoimmune diabetes have a slower progression, more known as LADA – Latent Autoimmune Diabetes in Adults (2). Important to remember is that despite not knowing everything about diabetes, they could diagnose patients at a quite early stage, meaning survival in some cases were “better”. Perhaps sometimes they were just lucky. The patients they managed to diagnose in an earlier stage most probably had some C-peptide (3) which might have prolonged their life for a short period. Elliot Joslin said two quite famous quotes which says a lot;

“We literally starved the child and adult with the faint hope that something new in treatment would appear…It was no fun to starve a child to let him live.”

What we do know is that everybody that had autoimmune diabetes before insulin was isolated died. Period.

Above is from a great and comprehensive paper by Allan Mazur; 4

After the isolation of insulin by Frederick Banting and Charles Best summer 1921, the first patient in the world to receive insulin was Leonard Thompson 11th of January 1922. First test failed, but twelve days later, the 23d of January, the team (now including biochemist James Collip) resumed the administration of the extract and now succeeded. Remarkable progresses was seen and Leonard left the clinic spring 1922, and lived 13 more years but passed away at age 27, eventually of pneumonia (5).

A few more patients were included in the trial when suddenly production of insulin fails, and the team lost the formula. No potent insulin is made between March and May 1922, until they succeeds to regain production in May 1922.

Theodore “Teddy” Ryder was born in Keyport, New Jersey, September 1916. At age 4 he was diagnosed with autoimmune diabetes and was put on the Allen diet described above. He got worse and at age 5 he could not walk without help. Teddy´s uncle was a doctor, Morton Ryder, who reached out to Banting when the family heard about the tests with insulin in Toronto. Banting initially told Morton that he did not have enough insulin to treat Teddy along with his seven other patients and asked Morton to bring him in September to be treated. Morton wrote a letter to Banting saying that he did not believe Teddy would survive until September. Banting agreed to treat Teddy and on July the 10th 1922, Teddy became one of the twelve first patients ever treated with insulin when he arrived to Toronto with his mother Mildred Ryder. Left at the picture is before arrival to Toronto, Teddy weighed 27 pounds and didn´t have much time left. The picture to the right shows a recovered Teddy who weighed about 46 pounds after insulin treatment was initiated:

Banting and Teddy formed an immediate bond and exchanged a series of letters over the course of their lives, until Banting passed away 1941. This is Teddy´s letter to Banting later in 1922: 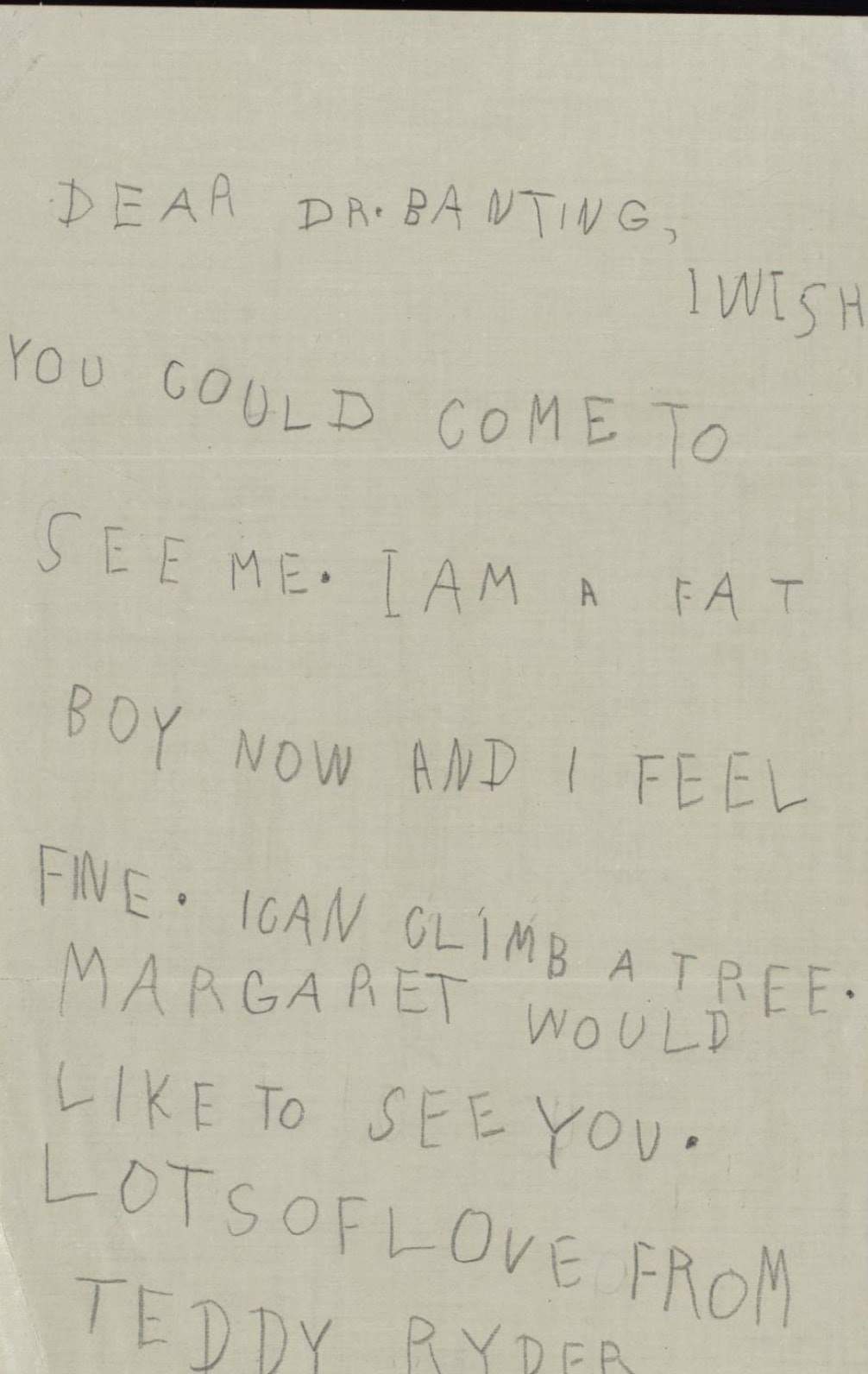 On Dec. 27, 1938 Banting wrote the following poignant letter to Ryder: “I shall always follow your career with interest and, you will forgive me if I add, a little pride, because I shall always remember the difficult times we had in the early days of insulin. The outstanding thing I remember was your strength and fortitude in observing your diet and the manly way in which you stood up to the punishment of hypodermic injections. I am sure that you will be a success in life if you maintain the same spirit in meeting the rebuffs of the world.”

Teddy, together with a few other patients, became a clear symbol for Banting and colleagues of the impact insulin had for many people, a diabetes celebrity. The comparison pictures of patients before and after insulin treatment are still seen as the most dramatic within medicine. In July 1992 at age 75, Teddy was the person who had lived longest with insulin, 70 years, and he had no serious complications from diabetes. He passed away the year after. Some articles: 6, 7, 8, 9. A great short clip with Teddy Ryder from 1990, except from the part in the end that “diabetes will be preventable and cured within a decade”, 10

The isolation of insulin is still considered as one of major breakthroughs within medicine all categories, and has saved millions of lives of people with diabetes. Banting and John Macleod received 1923 Nobel Prize in medicine, which they shared with Charles Best and James Collip. Today it´s estimated that ~200 million people in the world requires insulin daily to survive 11. Sad though, many still lack access.

Year 2022 it´s 100 years since the first human got insulin. Opposite what many thinks we are making progress even though it was to slow for many years. Several projects try prevention, most interesting is this 12. Beta cell proliferation is interesting research as well, 13, and we are not close but closer a cure 14. One of the most promising candidates in the last article is Doug Melton, who two weeks ago announced human clinical trials next year with human embryonic stem cells, 15. Actually two trials he replied to me. There will be many obstacles, but we must try in humans to proceed, mice are cured ~500 times. It will work, no one can stop the process even if they would like to. My wish is that researchers collaborate more, even though there of course is a race which promotes progresses. I personally feel research about the etiology of autoimmune diabetes is a bit neglected. For a viable cure for all and not a few we must know the cause of the disease, or at least being able to stop the autoreactive t-cells. Almost 100 years after a huge leap in the treatment of diabetes it´s time for next, to find what causes autoimmune diabetes and a cure. Research needs funding, see here how to support 16.

“We literally starved the child and adult with the faint hope that something new in treatment would appear…It was no fun to starve a child to let him live.”

Den 27 december 1938 skrev Banting följande brev till Teddy; “I shall always follow your career with interest and, you will forgive me if I add, a little pride, because I shall always remember the difficult times we had in the early days of insulin. The outstanding thing I remember was your strength and fortitude in observing your diet and the manly way in which you stood up to the punishment of hypodermic injections. I am sure that you will be a success in life if you maintain the same spirit in meeting the rebuffs of the world.”