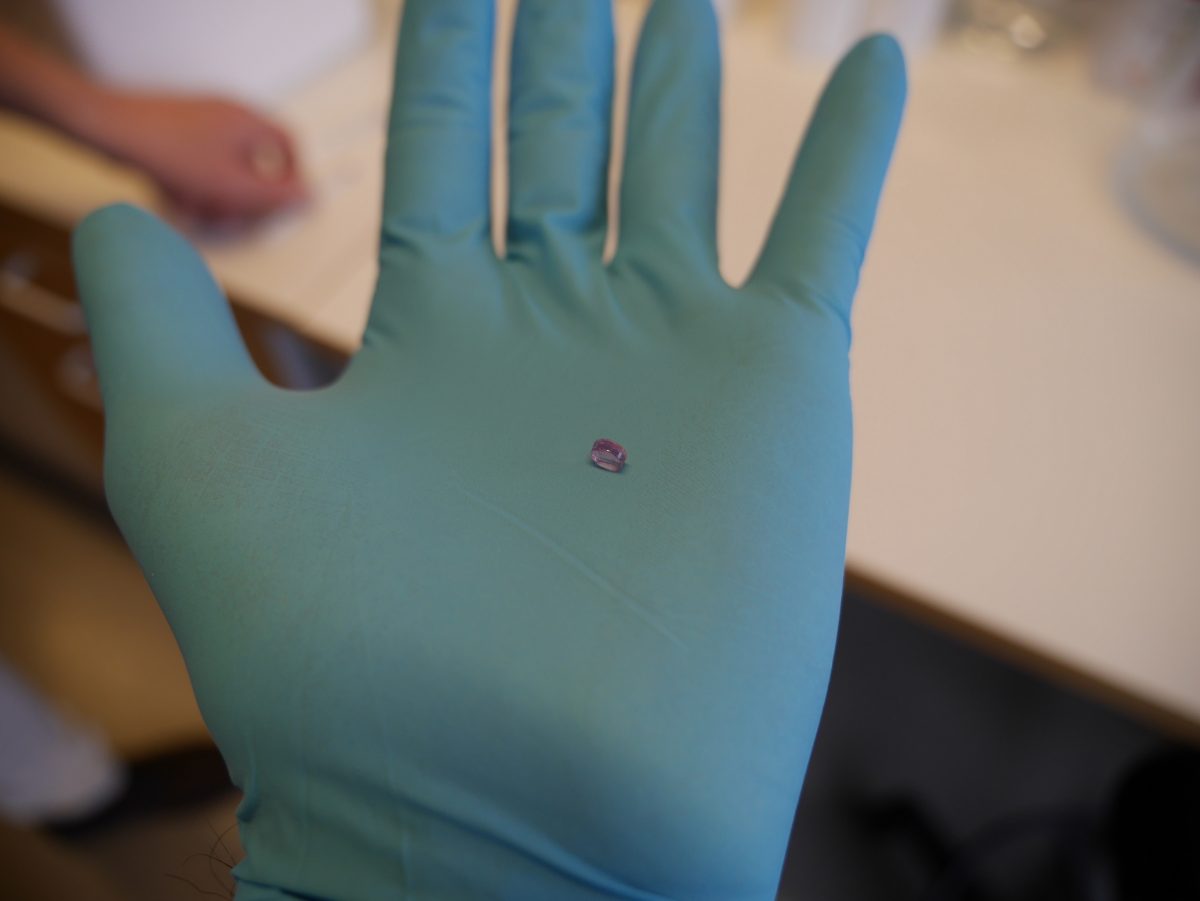 
What if we could resolve insulin production in patients who have lost it, with beta cells in a natural product? Very experimental research so far, but indeed intriguing.

For a viable cure, not only for a few but for all people with insulin-dependent diabetes researchers must resolve, or replace, insulin secretion and also hamper the destruction of beta cells by the immune system. We seems closer the first part since there is a race currently with several ongoing projects, I wrote about the most promising in my comprehensive article in the end of last year 1. The latter regarding the etilogy and what causes the disease, is unfortunately neglected research and don´t get much attention. Sometimes I see comments in social media as “that doesn´t help us”. If we wants other to care and support research, we should start with ourselves. Do we want to support prevention, so that other not get the disease? But this research is also important particular considering that we must know the cause and manage to hamper the immune system for a functional cure. A lot of my focus have been in this area for years, even before I started Diabethics. The case is that we know that the T-cells, the ones actually destroys the beta cells, are autoreactive years after diagnose, even though we don´t know to what extent. In this 12 year follow up they found that “In conclusion, multiple islet antibodies or GADA alone at diagnosis of diabetes predict future complete β-cell failure. After diagnosis, GADA persisted in most patients, whereas ICA development in patients who were antibody negative at diagnosis indicated decreasing β-cell function.” (2). It´s actually the last five years that we have seen studies with longer follow-ups of C-peptide, reflecting remaining insulin secretion (3), that we have seen that the decrease of insulin production continue the whole life, even though in general people have absolute defiency shortly after diagnose (not all with LADA, that can take some time). Here a few of those studies, in humans. TrialNet 4, T1D Exchange Group 5, TIGI consortium who with a large patient group said “we can calculate that for patients receiving a diagnosis of diabetes ≤10.8 years of age, it would take 0.6 years to reach the clinically important threshold of absolute insulin deficiency (0.2 nmol/mmol [equivalent to 200 pmol/L]) ), compared with 2.7 years in the older group (diagnosed >10.8 years of age”, 6. C-peptide decline doesn´t say anything about the eventual remaining autoreactivity, which theoretical could be due to few beta cells working too hard and giving up. But it seems like yes, most probably we have an over-reactive immune system even years after diagnose. The case is, we don´t know what eventually would happen if we were able to replace lost beta cells with own beta cells, since this is impossible.

Regarding replacing cells that could produce insulin as for a healthy individual, some are already in human clinical trials since years, as Viacyte, and some are about to start next year, as Semma or now Vertex Pharmaceuticals who recently acquired Semma Therapeutics for $950M, 7. Professor Doug Melton talks about the clinical trials taking place next years in this short clip of five minutes 8, and Semma later published more information about the trials 9.

Both Viacyte (10) and Sernova Corporation (11) have communicated positive result this fall, with detective C-peptide in patients. The companies have different approach as can be seen in my article “closer a cure”, for example Viacyte use stem cells and Sernova beta cells from donors. In both cases immunosuppression is a must, at least so far, which we wants to avoid for the mass. I get a bit annoyed about the communication skills in these companies though. On one hand, I think it reflect the hope we all have and we just wants a minor progress to freak out, they give us that. On the other hand, since I´m skeptical I think there is also a race about investments which means positive news are heavily anticipated, as well as not mention too much. We are anyhow moving forward, baby steps are also steps.

A few days ago researchers from Swedish KTH Royal Institute of Technology published a paper in Advanced Functional Materials with a different method to encapsulate cells. The group is led by researcher Thomas Crouzier, pictured below. 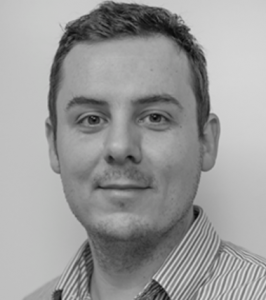 They addressed the challenge that many researchers for years have met, that anything implanted cause a FBR – foreign body reaction (12). The immune system try to get rid of the visitor, and fibrosis often occur. Fibrosis is the formation of connective tissue as a reparative response to injury or damage, but when this happens for example around a capsule the functionality is lost. Some of the most promising within diabetes trials shows less FBR though. Most groups of researchers use the alginate from brown algae, as I describe in my article above, but the KTH group made a gel from Mucin biopolymer, a mucin-gel or muc-gel. Mucin is actually a part of the saliva. Mucin also occur naturally in human bodies forming a Mucus Membrane, 13, 14, and consists of glycoproteins, 15. The gel the KTH researchers use comes from cows, and takes only a few days to manufacture. The group have only tried in mice so far, mice are not humans, and this is very experimental research. Interesting though is that Muc‐gels do not elicit fibrosis 21 days after implantation in the peritoneal cavity. The picture below shows a comparison after explants (21 days), between alg-gel and muc-gel. Under the picture you see an explanation, but in short the muc-gel doesn´t cause any inflammation or fibrosis, and it dampened the macrophage activation – meaning very accepted by the body. Remember, mice.

Please note that we don´t know their composition of the alg-gel, and cannot judge differences with the alg-gels in other trials. Also, as well as fibrosis is very important that’s not all. Nutrients must be able to cross the membrane of the gels surface, and in our case secrete insulin.

VISIT TO THE LAB

At Friday I met with one of the researchers in Thomas group, Hongji Yan. We had a long discussion of what they have found so far, and what is next. Pictured below is Hongji in their lab, holding a small syringe with the muc-gel. 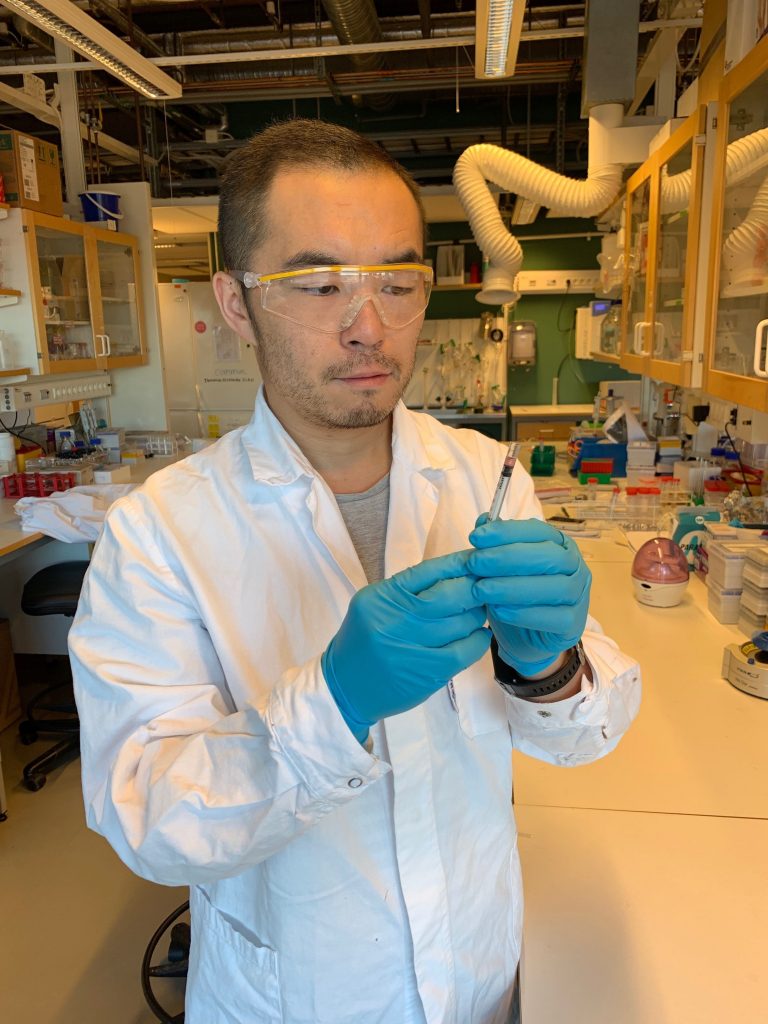 I got the chance to see it, and as a scientific nerd that has worked hard with particular these areas, etiology – the cause of autoimmune diabetes – and the cure, this is like really cool. Also important, why I wear gloves is not that it is toxic or dangerous, but in this very early stage it´s security first (times 100).

First, the gel in a small syringe where it´s kept in the process of manufacturing. 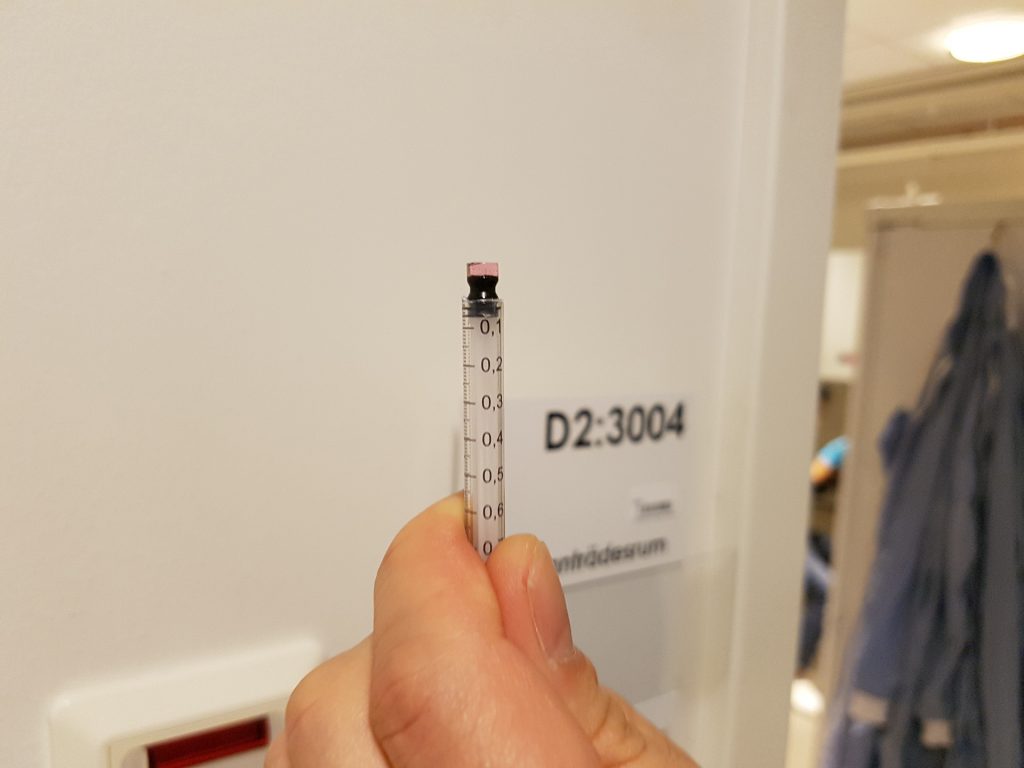 The size here is small, please be aware of that this is the one used in mice. 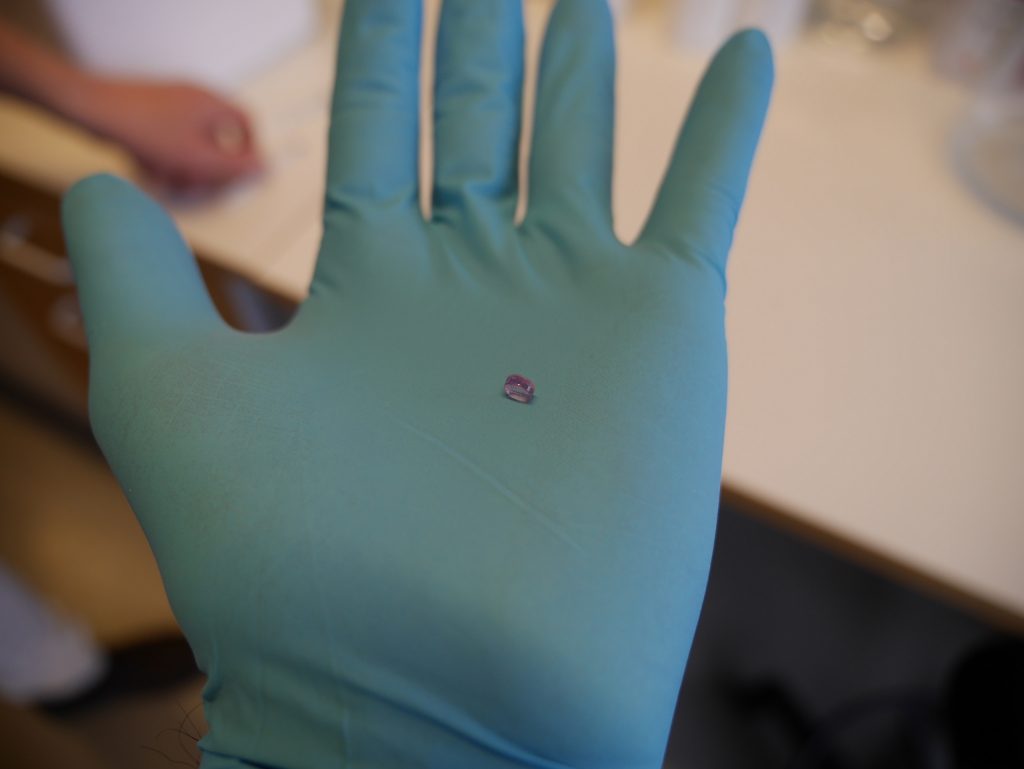 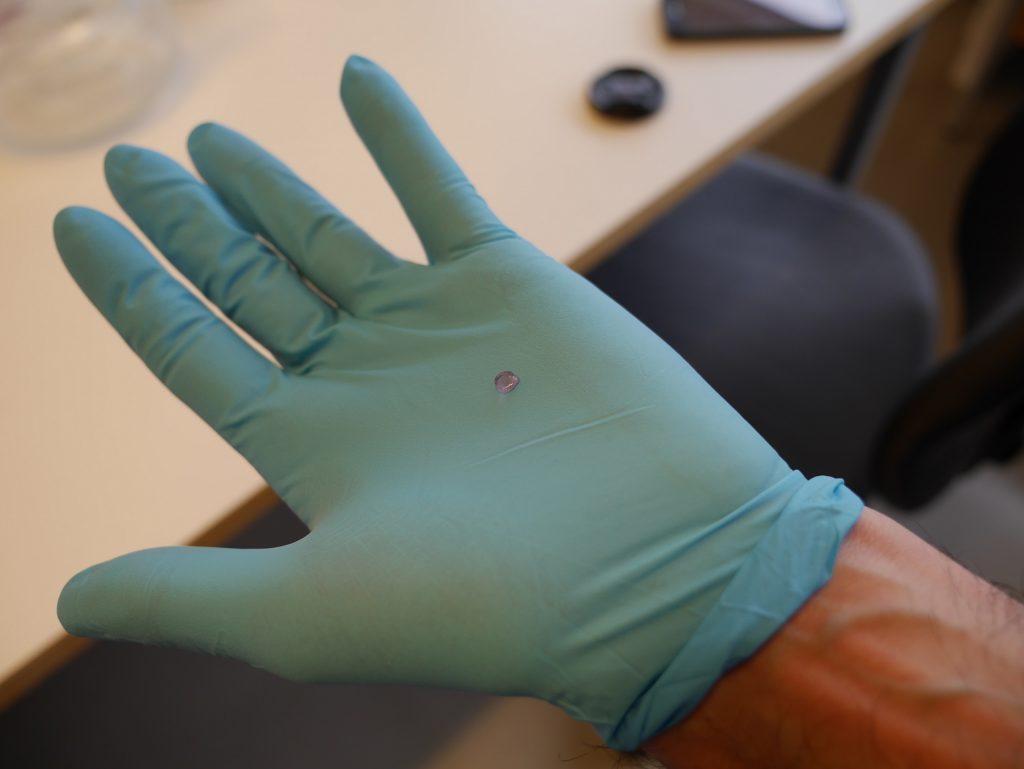 Enlarged, the reason to the blurriness. 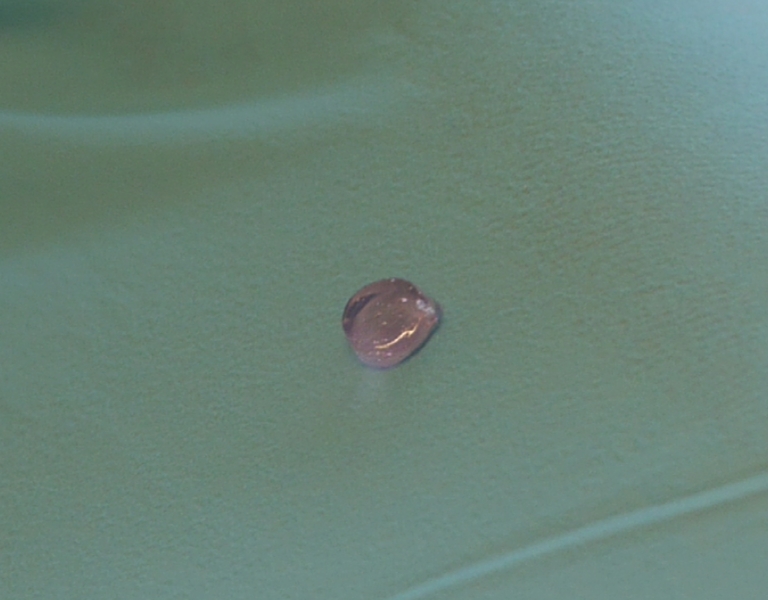 The group sees many potential areas where it could be used, as well as to encapsulate beta cells. They are in discussions with possible collaborations for tests with beta cells and I got glimpse of the coming paper where they move on, which I can´t disclose yet. They also highlight the possibility for implantable CGM´s where this might be used in the future. Technology a person have inserted for a long time have some kind of an anti-inflammatory steroid drug. For example pacemakers, and in the world of diabetes the only CGM that is approved for 180 days is the Eversense, where the sensor has a silicone ring that contains a small amount of dexamethasone acetate. The dexamethasone acetate minimizes inflammatory responses (16).

Paper as an abstract 17.

The groups in the front line of encapsulation of beta cells have tried a lot of materials and several are using alginate made of brown algae. That doesn´t mean they must have the best and only solution, even though they obviously are ahead.

Why am I excited about mice research, tested a short period without beta cells, since other are some steps ahead? Main reason is that the gel could eventually be made of the persons own saliva, hypothetical. If that would work this is a major advantage since we most probably would avoid immunosuppression. Second, since we are moving forward but still have no solution, competition is great of course. For us as patients we need as many projects as possible, that is not awaiting the result from a competitor. Third, the gel days a few days to produce and I personally would think it´s a low production cost, not confirmed though.

Of course, the researchers already ahead in clinical trials have an advantage considering timing, but I think it´s very important researchers gets the possibility to try other ways until we have something that actually works, particularly since I find it interesting if this gel means we possibly could avoid immunosuppression. Many trials works well in mice and other animals, this as well, but that is not humans. Research needs funding, and focus must now be on moving to humans. We need a cure, and we´ll see a cure. Not tomorrow, quite sure within those five years we`ve all heard of. The first solution we will see within this five years will not be for all, for a viable cure we need a solution where we avoid immunosuppression, we need a way to inhibit the autoreactive immune system and something that lasts. What happens when the gel described in this article disappear? Nobody knows, the researchers speculate that the beneficial effect of the gel on the immune system could remain even when the gel diminish. It will be exciting to follow.