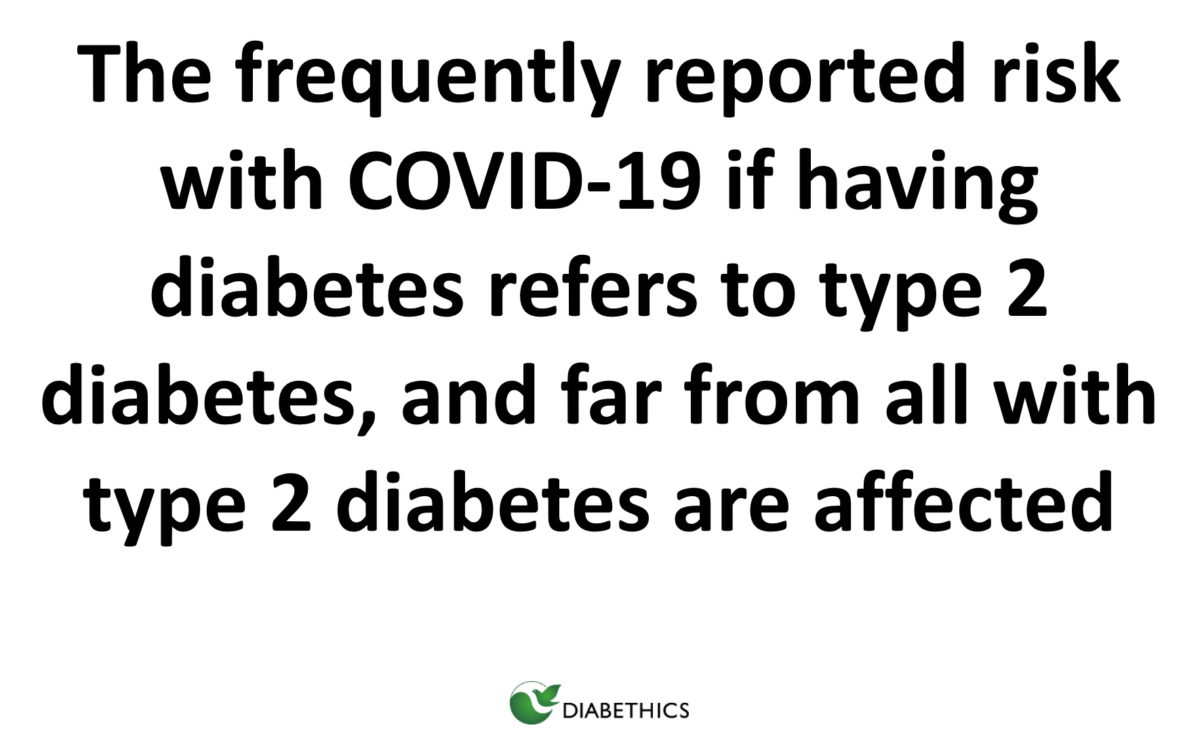 Risks with COVID-19 and diabetes


In the beginning of 2020 we learned about a new coronavirus that later was called SARS-CoV-2 and the infection caused by the virus was named COVID-19. Already in February the first studies was published, and as one of the major risk factors diabetes was mentioned which approximately 30% of the people who died had, often together with comorbidities. Here I will show you the association for severe infection and death is to type 2 diabetes and not at all type 1 diabetes, hereby named autoimmune diabetes.

The 30th of January The World Health Organization, WHO, declared COVID-19 a pandemic. I immediately saw a pattern in the first papers that this seemed to be type 2 diabetes, one of the first major studies was published in 24th of February (1). As of today we don’t have any detailed study but we have enough to see it´s not related autoimmune diabetes, but type 2 diabetes. The two major issues with this that shed a light on the differences between the diseases are:

ARE PEOPLE WITH DIABETES IMMUNOCOMPROMISED PER SE?

I had planned to write a comprehensive article about the immune system in diabetes and risk for viruses, infections and influenza for a long time, it was obviously great timing. That piece is not about COVID-19. Interestingly I often gets positive comments from HCP´s and researchers about my work but I have never got so much positive feedback. I published this in the end of March 7. As you see we don´t know all and more studies are needed, but it seems a higher HbA1c can increase the risk but particularly if having complications and/or comorbidities. Age and duration of diabetes have impact too.

IS COVID-19 DIFFERENT IN CASE OF DIABETES?

Importantly regarding the quite explicit associations in the first data between COVID-19 and what I saw as type 2 diabetes and the metabolic syndrome, correlation is not causality so I needed to find out more. I went to Chinese researchers who were amazingly quick to publish papers. I asked all that actually mentioned diabetes to try to make a sub analysis and distinguish autoimmune diabetes and type 2 diabetes. I got positive response from several of them, I was though aware of that autoimmune diabetes is rare in China who has one of the lowest rate in the world with an incidence of 1.9/100 000 children 0-14 year. In total, all age groups, estimated to 0.93/100 000. Despite increase still a rare disease. Paper from 2018 8.

At the same time, in the beginning of March, Italian media commented an analysis of the 102 first deaths in Italy from the Istituto Superiore di Sanità (ISS), Italy’s public institution within public health. I got it from a Swedish mother to a child with autoimmune diabetes living in Italy. Despite a small sample the trend continued and the 19th of March I made this:

ISS updated analysis of deaths twice a week and now once a week. They referred to diabetes as one of the most common underlying diseases but in my frequent contact with them several times I asked if any deaths that had the autoimmune form, they said no. They actually changed the column from diabetes to type 2 diabetes at least partly because of me and still, about 2000 deaths analysed, they don´t have anyone with autoimmune diabetes that have died. Doing some math, with a prevalence of 0.3% of autoimmune diabetes that should be about six people that have had died. What I was particularly interested of was of course to see if people with autoimmune diabetes was over represented or if the association I saw was true – it was more or less only related to type 2 diabetes. At that time, Francesco and Valentino had insight in the statistics for children with autoimmune diabetes, and in the latest update the 18th of April they replied:

So, if the risk was only related to higher HbA1c we should have seen more people with autoimmune diabetes of course. ISS has also shown since early in their work that about 96% of the people died of COVID-19 had at least one comorbidity and 61% had three or more, see the latest file 12.

A few days ago the first larger study from USA was published, where the researchers analysed 5700 people hospitalized with COVID-19 in New York City Area. The association was similar, about 34% had diabetes but here the authors wrote “Assessed based on diagnosis of diabetes mellitus and includes diet-controlled and non-insulin dependent diabetes.” This was the first time anybody tried to be more diligent. The paper: 13.

I’m biased as a Swede, stating we have certain control of people dying. We are not unique, but due to our personal identity number and our detailed cause of death register from The National Board of Health and Welfare we have better control of people dying than most countries in the World. I have had frequent contact with several people there for years, writing about the yearly published statistics of deaths. In November 2019 in English too 14. Since Sweden now has 2 900 deaths of COVID-19 and diabetes is mentioned here as well, without separating it even though I have tried to make them do that, I chose the other way around. I asked National Board of Health and Welfare how detailed information they have so far, they have analysed 2 500 deaths but not distinguished autoimmune diabetes and type 2 diabetes. I purchased that service from them, this is the result so far:

Important is also at the other side to look at type 2 diabetes as well. Considering the prevalence of type 2 diabetes in the population in some countries, particularly in the age group more affected, it´s not a major deviation, for example in Italy. Here is an interesting paper looking into this 15. Another study from Italy looked into the characteristics of people in the ICU and the outcome. About 17% of people in the ICU had type 2 diabetes but 32% of the people who died (16). I don´t compare the same sample naturally, but that diabetes with comorbidities can worsen the outcome is well-known. Having that said, it´s not only about diabetes, and giving the prevalence of diabetes in the population all are not at risk. Looking in Sweden, far from the end of the pandemic for sure, but 642 people of the 2500 dies so far had type 2 diabetes, of approximately 400 000 people with the disease.

Last but not least, many have tried to find a possible explanation between risk for severe illness or death of COVID-19 if having diabetes, instead of trying to look further in the data. The most popular thesis is angiotensin-converting enzyme 2 (ACE2), which is expressed by epithelial cells of the lung, intestine, kidney, and blood vessels. The theory is that expression of ACE2 is substantially increased in patients with type 1 or type 2 diabetes, who are treated with ACE inhibitors and angiotensin II type-I receptor blockers (ARBs). That correlation is weak. “In this large, population-based study, the use of ACE inhibitors and ARBs was more frequent among patients with Covid-19 than among controls because of their higher prevalence of cardiovascular disease. However, there was no evidence that ACE inhibitors or ARBs affected the risk of COVID-19.” 17

Another interesting paper in this topic:

Some organisations was quick to meet this too:

Autoimmune diabetes and type 2 diabetes are both heterogeneous diseases, but also totally different from each other. It´s about time we change the name of type 1 diabetes, autoimmune diabetes is perhaps not the best alternative but describes what it is and it´s easier to ensure a change that is not to huge. I have worked hard for years to establish the name autoimmune diabetes in Sweden, together with some researchers of whom some belongs to the highest ranked in the world.

Media has a huge responsibility here too. We can´t expect them to understand all diseases, but if writing about diabetes we require some sort of fact check, particularly in such a topic. The downside is that these headlines that have been going on in almost ten weeks, “about a third of those who died from COVID-19 had diabetes”, cause a totally unnecessary anxiety, in children too. I have received a lot of messages over the past few weeks regarding to children, COVID-19 and the reaction.  This is beyond sad.

Personally I´m happy and impressed we see such a huge amount of scientific papers in such a short time, but many have an erratic behaviour or more, interpretation. It seems some researchers and journalists have to learn the difference between correlation and causality, before frightening people with just a shred of science. If I who works on my own with zero resources can get more details, they could as well.

Try to not panic but listen to national recommendations. 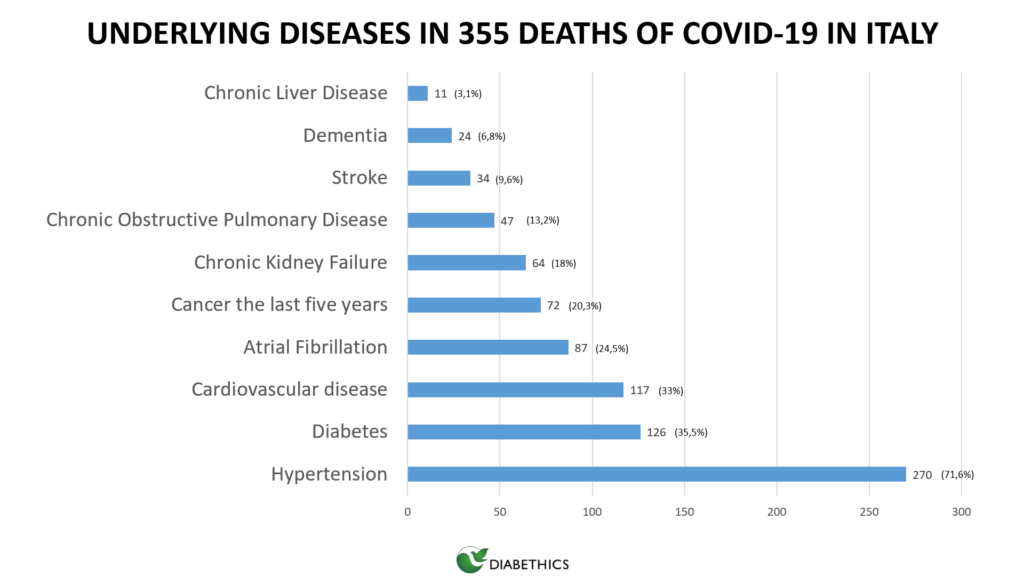 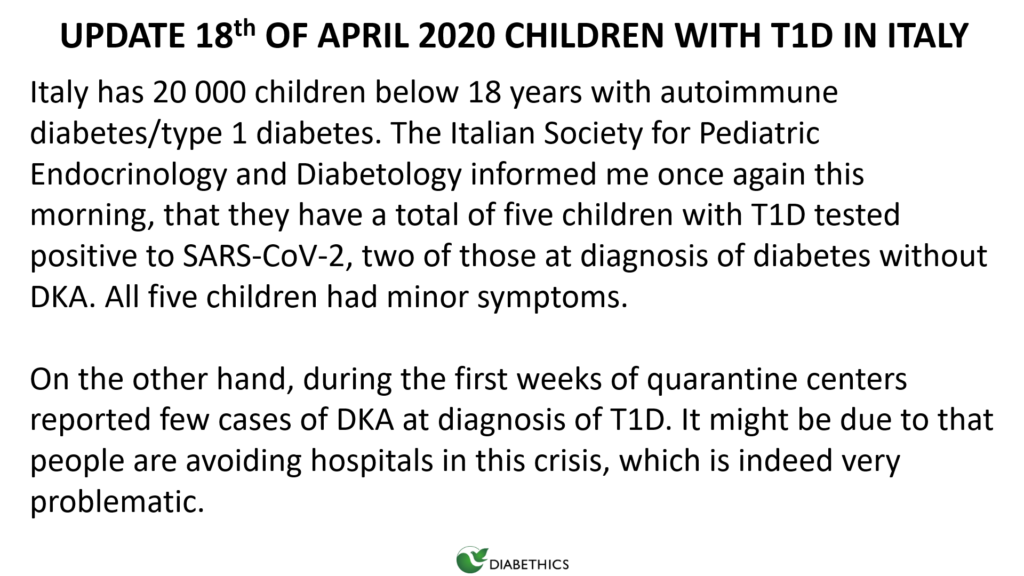